From Brussels with Love 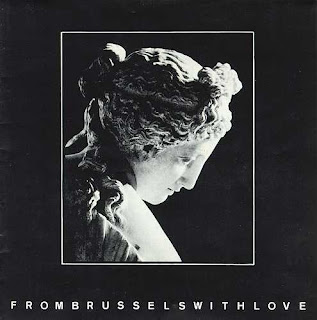 Compiling music is an art. The vast majority of rock and pop music compilations fall normally under the category of dispensable product. Leaving aside the financial and legal constraints of bringing together licenced songs owned by diverse record companies, people who normally put together compilations do so not for the love of music but mainly for commercial reasons. In most cases it is quite clear that the "compiler" has a very superficial knowledge of the music genre he/she is trying to represent objectively in 60 to 70 minutes. Most compilations use the commercial formula of including two, three well known songs and the rest filler with no particular attention given to the order of the songs as they are played. People are attracted by the decoy songs and buy the album.
In the time of the vinyl and the cassette, you were more likely to listen to an album from start to finish simply because to change from song to song meant to either get up, lift and place the needle or go through the hassle of pressing the forward wind button on the cassette deck. Today with the automatic zapping of music offered by the CD, the order of the songs is not important anymore. Concept albums are a thing of the past. But I think there are things that we have lost in the technological fire…
The order of the songs in a compilation is an essential element in defining the journey, the mood, the importance, the point or the link you are trying to make. You see, to compile is to make a statement. A song is also defined by its neighbouring songs. You can kill a good song and you can also "create" a masterpiece out of a mediocre song by placing it after a certain type of music that happens to be different.
And then the main mistake people make when compiling songs is that they don't think of the compilation as something more than a simple collection of individual tunes or songs. But the real art of compiling music is actually creating something more than the simple addition or collection of its parts/tracks. The fact that I like all the tracks compiled does not make a good compilation. Each track could be placed to lead effortlessly to the next one or the succession could bring the element of surprise without cancelling the flow. Does it all sound Greek to you?
Here is what I mean…
"From Brussels With Love" was an eclectic compilation released in an initial edition of 1000 copies on 20 November 1980. At the time it took the form of a deluxe cassette together with a book in a plastic wallet. It featured 22 exclusive tracks from the front rank of the international avant-garde and new wave, as well as several artists from the feted Factory Records stable in Manchester and Belgian label "Les Disques du Crepuscule". The collaboration between the two labels started after the organisation of the Joy Division concerts at Plan K venue in Brussels (21 rue de Manchester) on 16 October 1979 and 17 January 1980, and was cemented when A Certain Ratio, Durutti Column and Section 25 performed at Plan K on 26 April. In addition, Brussels band The Names joined the Factory roster.
Besides Factory, another crucial influence on From Brussels With Love was radio producer and new music composer Wim Mertens, whose book American Minimal Music had just been published by Kahn & Averill. The featured interview with Brian Eno had been recorded by Wim in New York in June 1979, as was the recording by Phill Niblock. It's therefore hardly surprising that Michael Nyman and Gavin Bryars also agreed to contribute tracks. Mertens would make his own debut on Crepuscule (initially as Soft Verdict) the following year. Eno's Obscure label was another key influence on early Crepuscule.
The compilation which included interviews with Brian Eno and Jeanne Moreau was purposefully international in scope, with France (Radio Romance), Belgium (The Names), Germany (Der Plan) and even Scotland (Richard Jobson) all represented, as well as the more familiar British and American contingents. The design, too, was seductively Continental, with text printed in a variety of languages, and copious line/cartoon illustrations by Jean-Francois Octave which reflected the Belgian and French obsession with bande dessinee.
The remastered CD (2006) version of the tape features all tracks included on the 1980 cassette version, with the exception of Felch (live) by A Certain Ratio. These are: