The Chiaroscuro Life Of Caravaggio 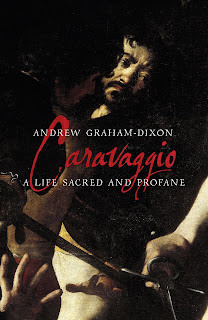 Andrew Graham-Dixon's book is a well researched and fascinating biography of a painter that lived a life as dramatic and extreme as the paintings he left behind. Caravaggio was different. His perspective on religious symbolism embraced truth and not glorification of the divine. Violence, sex, dirt were part of everyday life in the beginning of the 17th century. Caravaggio did not aspire with his paintings to move the common people towards the divine. He rather brought the divine down to the people in a pictorial form that they could perfectly relate to. The faces of Caravaggio's saints and martyrs were not idolised portraits but real human beings. Old men and women, beggars, prostitutes and pimps who take up their roles and re-enact scenes of religious passion.


And then his choice of when to depict the exact moment of the unfolding drama and of course the use of light, shadow and darkness will influence so many painters such as Rembrandt for example. Caravaggio's paintings are snapshots from obscure rehearsals of plays that were never performed because they were always quite provoking and overtly sensual to conform to what was considered proper at the time.


Caravaggio's life was no less real and anti-conformist. Graham-Dixon looks in the archives, blows away the dust from manuscripts and old leather bound books, analyzes the paintings and manages to lift a little the fog surrounding the painter's constant obsessions which quickly turn to confrontations with disastrous results. Duels, murder, narrow escapes, Malta and the Knights of Saint John, the Vatican, ugly scars and a death which was fitting in drama to any of his paintings, make for a fascinating read. 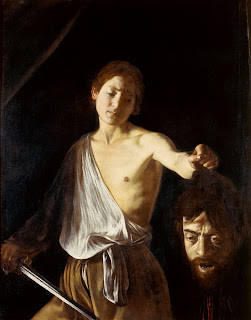 In the end Caravaggio's life caught up with his painting or the other way round and they became entwined. He actively sought redemption the only way he knew which was through painting. The painting of "David with the Head of Goliath" from 1609-1610 where Caravaggio has put himself in the place of Goliath, was his way of saying I am carrying the guilt and I need absolution which in the end was never forthcoming.
Posted by Douglas at 9:00 AM