The Young Watchmaker and the Center of the Universe 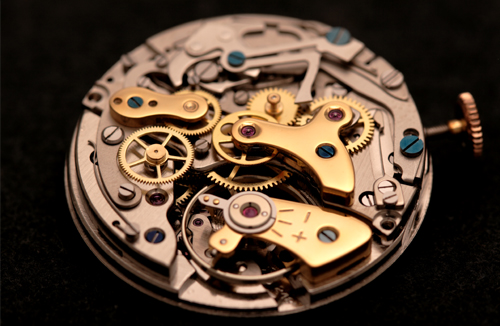 He must have been at the age of five or six. He could remember vividly the first time he actually, consciously, saw this strange “thing”. It was a shiny, round shaped object at the end of a gold chain which fitted nicely in the palm of his father’s hand. His father would take it out from time to time, press a secret little button which would flip the cover. He would look at it and instantly pronounce “The Time”. Then it would quickly disappear in the pocket of his waistcoat. It was certainly a magical object. After all, it gave its owner the authority to know and to tell “The Time". And everybody knew that everything you did had to be understood in terms of time. Late for school, not enough time for that, too early for this, it was all a question of time. And time and again he thought that he should get to the bottom of this, find this object and examine it carefully. By now he knew that this object was called “the watch”. And in his young mind this “watch” became an obsession and took mythical proportions.

Evidently, it had eyes because watch meant also "to see”. That made sense to him because time seemed to be everywhere. Nothing could escape time. You could not hide from time. Time would find you and when it did, you realised that time knew all along where you were because it had not stopped. It had seen you. The un-blinking eye of "the watch” was terrifying and fascinating at the same time.

And then one day, he found an old watch lying in a drawer, among dusty papers and old envelopes. He decided to open it up, to operate. He had to see what made this un-blinking eye work. What was the force that moved the hands of time transforming caterpillar into butterfly, seconds into minutes, hours into days, days into months and years.
With a fairly blunt breadknife, he prised open the back of the watch and saw for the first time “the center of the universe inside”.