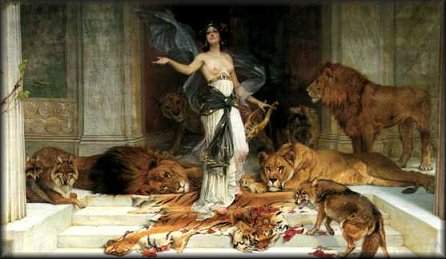 In a passage from "The Odyssey", Book X, Homer describes Odysseas and his companions arriving in Circe's island. There, in a clearing in the middle of a dense forest, they find her enchanted palace. They are surprised by what they see...

In a forest clearing they found Circe's house— [210]
built of polished stone, with views in all directions.
There were mountain wolves and lions round it,
all bewitched by Circe's wicked potions.
But these beasts made no attack against my men.
No. They stood on their hind legs and fawned,
wagging their long tails. Just as dogs will beg
around their master when he comes from dinner— [215]
since he keeps bringing scraps to please their hearts—
that's how the wolves and sharp-clawed lions there
kept fawning round those men, who were afraid
just looking at those fearful animals.
They stood in fair-haired Circe's gateway [220]
and heard her sweet voice singing in the house,
as she went back and forth before her loom,
weaving a huge, immortal tapestry,
the sort of work which goddesses create,
finely woven, luminous, and beautiful.

The poet Percy Bysshe Shelley was similarly surprised many years later when he visited Lord Byron's home in Ravenna. In a letter to Thomas Love Peacock on the 10th of August 1821, Shelley describes Byron's unusual lifestyle at his Circean palace:


"...Lord Byron gets up at two. I get up, quite contrary to my usual custom... at 12. After breakfast we sit talking till six. From six to eight we gallop through the pine forest which divides Ravenna from the sea; we then come home and dine, and sit up gossiping till six in the morning. I don't suppose this will kill me in a week or fortnight, but I shall not try it longer. Lord B.'s establishment consists, besides servants, of ten horses, eight enormous dogs, three monkeys, five cats, an eagle, a crow, and a falcon; and all these, except the horses, walk about the house, which every now and then resounds with their unarbitrated quarrels, as if they were the masters of it...


P.S. After I have sealed my letter, I find that my enumeration of the animals in this Circean Palace was defective, and that in a material point, I have just met on the grand staircase five peacocks, two guinea hens, and an Egyptian crane. I wonder who all these animals were before they were changed into these shapes..."


Nathaniel Hawthorn seemed to know the answer of who they were and what to do with them having dug deep in the original tale of Homer:


“...As for the lions, tigers, and wolves (though Circe would have restored them to their former shapes at his slightest word), Ulysses thought it advisable that they should remain as they now were, and thus give warning of their cruel dispositions, instead of going about under the guise of men, and pretending to human sympathies, while their hearts had the blood- thirstiness of wild beasts. So he let them howl as much as they liked, but never troubled his head about them...” (taken from "Circe’s Palace" found in his "Tanglewood Tales" of 1853)


But in the end those beasts were not all that bad. As a matter of fact, a few of them, with the help of Circe, refined their howling and eventually produced some very beautiful music. Judge for yourselves...