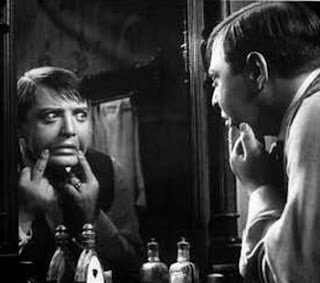 It was 1924-1925. Peter Lorre in his early years on the stage had very quickly earned the reputation of a scene stealer. Hilde Wall, the later wife of Max Ophüls, remembered sharing the stage with Peter Lorre who in that particular performance played the insignificant role of a servant. His little bit was to come in and announce that Frau Schultz was here to see her. That's all he had to do, just come in, say those words and go out. Lorre came in and sat down. "Of course, you know Frau Schultz," he said. "Yes, of course I know her," Wall said, simply trying to follow along. Lorre pulled out a cigarette, lit it, and looked up. "She's been here quite a few times lately, hasn't she?" "Yes, of course, she's a friend of mine." Lorre drew long drafts, puffing the moment into something greater, stubbed out his cigarette, and then got up. "Well, Frau Schultz is here to see you." he said, finally delivering his one and only line. On that, he exited and the audience applauded.
Taken from the newly published biography of Peter Lorre "The Lost One" by Stephen D. Youngkin.
Posted by Douglas at 3:27 PM